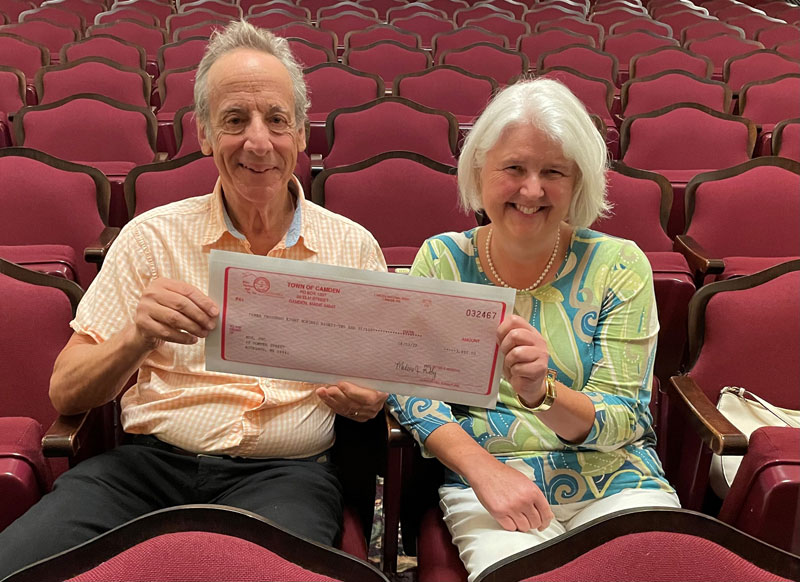 “Bingo Queen” producer John Burstein presents a check for $3,892.50 to Liz Schuh, Executive Director of the nonprofit MCH, Inc., at the Camden Opera House, where Burstein’s show to benefit Meals on Wheels was performed July 29 and 30. (photo credit: Dave Morrison)

The last weekend of July saw an original musical comedy produced at the Camden Opera House as a benefit for Knox County Meals on Wheels. The two-night show, co-presented by the opera house, raised $3,892.50 for the local Meals on Wheels program run by MCH Inc. in Rockland.

Local actor, writer and producer John Burstein created the show, and joined a cast of mostly New York-based actors on stage for two evenings of fun and fund-raising. Each audience member got to play a few games of Bingo for a chance to win prizes generously donated by Natalie’s Restaurant, the Samoset Resort and Maine Sport Outfitters.

MCH Meals on Wheels delivers hot, nutritious meals to adults over 60 and individuals with disabilities in Knox County, making it possible for them to live at home as long as possible. Meals, cooked from scratch each day, can be delivered on a long- or short-term basis.

Liz Schuh, MCH, Inc. Executive Director added “What a fun show!  Our thanks to John Burstein and the Camden Opera House for supporting Knox County Meals on Wheels.”